Even more than the visual, which I had been eagerly anticipating, was the aural, which came as an unexpected surprise.

And it also came first.

It was the whistle that got to me, the vibrant, perfectly pitched and steam-released Hello, I'm Almost There. I could see a mile or so down the empty track, but had yet to see the Spirit of Roanoke, the Class J 611 steam locomotive and the only survivor of its kind from another, perhaps less complicated era.

But I knew she was coming. We all did. About 100 of us gathered around Lexington's reconstituted freight depot to watch our 65-year-old history steam by us, on it's return trip to Roanoke after a year of restoration at the Spencer shops.

Then, in a moment, she was in sight. First was the billowing black coal smoke above the trees. Then the incredibly bright engine light. And still there was the whistle with its promise of that mysteriously delightful Doppler effect — is it only train whistles that we hear that way?

When the engine finally reached us, bringing with her a symphony of sounds, including the unmistakable chugging rhythm of the boiler, pistons and drive wheels in 4-8-4 time, I almost missed her. I was busy scanning a view finder, one eye looking through a camera lens, the other on the train itself. Impossible multi-tasking. Wait. Wait. Wait. Now! Click.

If I'd waited one more second, I might have had a better picture.

I thought I had time to snap one more, but by then I was being Dopplered. So I had to be content with the image that I caught.

As it was, Kim and I had seen her in Spencer a week ago, regally posing for her fans with less pressure on the photographer to make snap decisions. I have a pretty nice photo gallery going.

Later in the day, I started Googling various Web sites, including the NC Transportation Museum, trying to see how the locomotive was received at other towns along the way.

Apparently, fairly large crowds turned out all along the route. Thomasville was impressive. So was Lynchburg. The 611 pulled into Roanoke sometime around 5 p.m., taking something like nine hours to cover what an automobile can do in under three hours.

I know. Not a fair comparison. This trip was a sendoff excursion, after all.

And there's no romance in car travel. Not really.

But as the 611 showed, there is plenty of romance in history.

It was a special day.


Posted by Bruce Wehrle at 7:15 AM No comments:

For more than 30 years, I thought I had the best job in the world.

I mean, I was a sports writer, for crying out loud. I got to go to games. I got to meet famous athletes. I got to write about them. And I got paid for it. What could be better than that?

"Do you have the best job in the world?" I asked the friendly man sitting at the controls of the gigantic Spirit of Roanoke, the absolutely beautiful art deco-ish Class J No. 611 Norfolk and Western Railway steam engine that just completed a year of restoration — its second such career overhaul — at the North Carolina Transportation Museum in Spencer.

"Yes," replied engineer Sandy Alexander without a second wasted in thought. "This is a great job."

No doubt. The No. 611 is one of only 14 Class J engines ever built by the Roanoke Shops, and is now the only surviving locomotive of its kind in the world. In the world, mind you.

And it's in Spencer.

But not for long.

On Saturday, May 30, the engine returns to the Virginia Museum of Transportation in Roanoke, VA, under its own power. That means something like the equivalent power of 5,100 horses will race through Lexington sometime between 7 a.m. and 8 a.m.

The bullet-nosed 611 with the Tuscan stripe is 65 years old, just a year older than I am. (My claim to fame here is that I have yet to need one restoration, much less two). If you notice, I keep mentioning that the 611 is a "steam" engine, which might seem a bit odd given that the first generation of the more economical diesel engines were coming into vogue by 1950, when the 611 was built for $251,544. (The current restoration, by way of contrast — and inflation— cost somewhere between $750,000 and $1 million, much of it through donations).

But much of the trackage of the N&W ran through the Appalachian coal country of West Virginia, something that required both the incredible power and the anthracite patronage of the Class J vehicle. The N&W actually built two more Class J engines before going diesel in the late 1950s.

The Class J series is said by those who should know to be the most reliable and precisely engineered of steam locomotives. There must be something to be said for a 65-year-old locomotive that might still be the state of the art in steam rail travel. Back in its day, one of the Class J engines hauled 15 cars at 110 miles per hour on a test run on a straightaway in Pennsylvania.

But by any measure, the Class J is a strikingly beautiful piece of machinery that somehow manages to exude subtle art, unbridled manifest destiny and wistful nostalgia all at once.

Yeah. Train engineer is the best job in the world.


Posted by Bruce Wehrle at 8:18 AM No comments:

Well, Mom, I made it this far.

I think about this — and you — on Mother's Day. I wonder how many grown men (maybe even nearly elderly men) think about their mothers? I guess it happens. We are all children, after all. 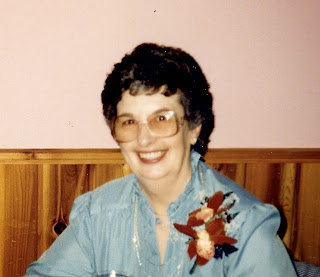 I suspect you know this, but I'm 64 years old now. I retired as a sports writer in 2006 after 30 years with The Dispatch. I think you were always kind of proud of that for your oldest son: Steady job, doing what he liked — watching people play games and writing about it.

It turned out to be a successful career, and I think that success helped you to validate the job you did in parenting me. I always sensed your pride in me. That's something a child yearns to feel from his parents. It means I'm still trying to follow the values you set for me, still trying to make you proud of me. It's something sons do, I think. Or should.

Another thing that made you proud was the girl I married. I know you loved Kim, and you'll be pleased to know that, even now, she thinks of you nearly as often as I do. I like how you became friends.

I never saw this coming when Kim and I were dating, but it turns out that she's a pretty good cook. You knew that, of course, and you shared many of your recipes with her. To this day, I enjoy the bacon dressing on my German potato salad, or those labor-intensive Moravian sugar cakes during the Christmas holidays. Should I admit that when Kim makes something from your recipe book, I usually blurt out, "That's as good as Mom used to make!"

I can't believe it's been almost 24 years since you died. You'd be 87 years old now, a longevity that seems to have run through the Kessler family — except for you. You fought your cancer with a sublime, quiet courage, I thought, perhaps passing along by example another life lesson in dealing with adversity and events beyond your control.

You gave me life and the tools to nurture that life, so it seems inadequate to simply say "Thank you."

And, yet, it's also the highest, sincerest compliment I can offer.