The last time we'd been to Monticello, Thomas Jefferson's self-designed masterpiece located just outside of Charlottesville, VA., was probably about 30 years ago.

We enjoyed it so much that Kim had been bugging me to go back for the past 29 1/2 years or so.

We finally gave ourselves the opportunity to return last weekend when we made our annual pilgrimage to Richmond to attend a Civil War artifacts show with another couple.

So we went. There were some changes from what I last remembered about our previous visit to Monticello. Imagine that.

First off, there is now a visitors' center. It's where you purchase your ticket ($23) and catch the shuttle to the premises. Then, as the visitors assemble, they are segmented into manageable tour groups of 20-25 people. Each tour group is separated by about 10 minutes from the other.

Considering that this was a cold, blustery Sunday morning in November, I was shocked by how many visitors were on hand. It was remarkable. Tour groups were everywhere.

What I remember from 30 years ago (It's amazing the things I remember that I don't remember. It's a real conundrum) is that we drove to the actual Monticello property, parked the car, purchased our tickets on site, then met a tour guide at the front door, where we waited patiently for 15 people to show up to form a tour group.

Anyway, our assigned tour guide was an African American gentleman who also happened to be a sophomore at nearby University of Virginia, where he was majoring, curiously enough, in poetry.

I mention our tour guide's ancestry because Monticello was designed as a working plantation that utilized the labor of about 150 slaves toiling for the author of the Declaration of Independence, a man who famously wrote that all men are created equal. Talk about conundrums.

Jamal was great. He pointed out things like the weathervane and cannonball clock that Jefferson designed, as well as elk antlers from the Lewis and Clark expedition that occurred during Jefferson's presidency. He showed us the bed in which Jefferson died, Jefferson's library, and Jefferson's self-taught architecture flourishes. All the while, he would insert African American history tidbits regarding Monticello that added fascinating perspective to the tour.

Monticello (correctly pronounced Mon-tee-CHEL-lo) is not part of the federal National Park Service, but rather sustained by donations, admission fees and probably the occasional grants. The place is a working archeological site where they are constantly discovering slave graves or peeling back the wallpaper to find the true color of paint on the walls. Neat stuff.

At one point on the tour Jamal mentioned that Jefferson thought the Constitution should be rewritten every 20 years to keep pace with changing times. When the tour was over I privately asked Jamal if amendments weren't the tools for changing the Constitution. I mean, what did Jefferson know? He was off in France when the Constitution was still in draft form. Jamal agreed that rewriting the Constitution now probably would never work, especially in these partisan times. But back in the nation's formative years, it might have been a workable concept.

I asked him if he thought writing the Constitution every 20 years might have brought an earlier end to slavery, and perhaps without a Civil War at that. He thought it over for a minute and agreed it could have been a possibility.

Our trip to Monticello was fruitful and enlightening. We're planning to go back again, perhaps in the spring when the weather is warmer and the gardens are in bloom.


Posted by Bruce Wehrle at 8:06 AM No comments:

Whenever I surf Facebook to see what my friends are eating that day, or who's mad at the Eagles for not signing the next franchise running back, or to just smartass with my buds, I also find myself slogging through a quagmire of memes.

I generally don't pay much attention to memes. Most of them are well-meaning and usually reflect the sincerity of the sender, and that's OK. I'm just going to scroll past them because I am who I am and a meme isn't likely to make me a better person, even though the sincere sender might wish otherwise.

I'm approaching septaugenarism and pretty much set in my ways anyhow, I guess, so it's unlikely a meme is going to make much difference to me regardless.

But I also like clever stuff and a good meme should make you stop scrolling for a minute while you ponder the "Aha!" moment. I generally give each meme I see about two seconds to try and work its magic on me before I scroll on. Wordy memes especially get a quick pass.

But this past week, I came across two memes that really did the trick for me.

Here's the first one: 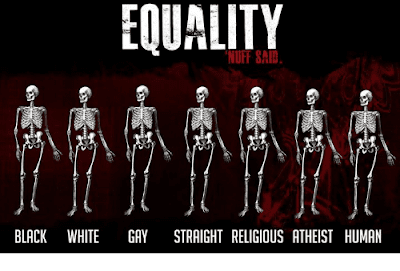 I think I've seen this one before, but given the perceived raised level of national bias against nearly everybody these days, I thought it was particularly effective.

At this point I'm tempted to give my two cents worth, because it's my blog and I can say what I want (First Amendment, which I don't think can be cancelled by executive order). But I don't want this to become a sermon. I think the meme can speak for itself. That's the beauty of a good meme when it makes you think.

The second meme was this: 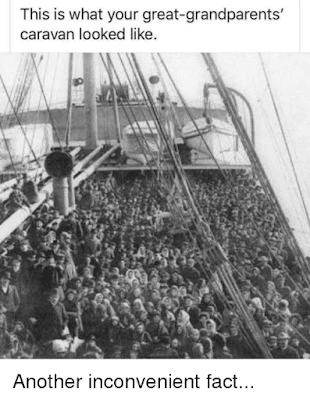 The current branch of Wehrle boys are fifth generation Germans. If Franz hadn't left Wilhelmshaven for Pennsylvania in 1862, it's likely I'd never have had a barbecue sandwich from the Barbecue Center.

I'd never have met Kim.

There's currently a rapidly shrinking caravan of Hondurans and Guatamalans approaching the southern U.S, border seeking asylum from oppressive governments and they've been turned into a political tool just in time for the U.S. midterm elections.

But it's not surprising.

Immigration has been a difficult and complicated issue in this country, well, almost forever. There's the forced immigration that was slavery, starting in the 1600s. The Great Migration followed shortly thereafter, bringing Germans, Irish and Italians, which didn't sit particularly well with the established xenophobes. During the Civil War, for example, non-English speaking Union German soldiers were reviled as "Flying Dutchmen" after Chancellorsville and Gettysburg. Irish "need not apply." Italians were criminals.

Chinese immigration didn't go particularly well on the west coast in the mid-1800s, even though the Chinese helped build a transcontinental railroad. During the Civil War. Let that one sink in. Fight a war, and meanwhile use immigrant labor to build infrastructure.

As late as 1939, a boat loaded with 900 Jewish asylum seekers fleeing Nazi persecution, the MS St. Louis, was refused entry to this country.

We like to think we're better than this. There's a statue in New York Harbor that says we are. Maybe we aren't.

Damn. I preached a sermon anyway.
Posted by Bruce Wehrle at 8:26 AM No comments: