What, are you nuts or sumptin'?

I told myself that I wasn't going to do this.

I was not going to play golf this summer when the temperature was in the 90s or higher. I used to do that when I was younger and dumber, but not anymore. Not since I'm a wise old graybeard now. 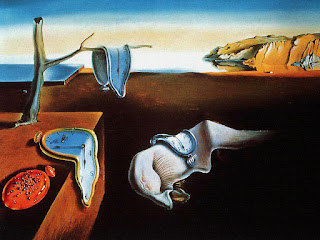 As things turn out, being in the 90s is how hot it's been most of the summer, or so it seems. Even the evenings have been unbearable. Everything seems to have slowed down to molasses time. Everything seems to be like a Salvador Dali painting of melting clocks and watches. I know where he got his inspiration now.

Anyway, Wednesday night I got an unexpected phone call from my friend Lee.

"Do you want to play golf tomorrow?" he asked.

My brain froze. The question didn't quite register. Golf? Tomorrow? Didn't I just hear it was supposed to be like 98 degrees?

"Isn't it supposed to be like 98 degrees?" I asked, repeating what my mind was telling me because when it's this hot, it's too much work to think. I was beginning to annoy myself.

What, am I nuts or something?

Understand that I love to play golf. I even thought that when I retired, I'd be playing golf all the time, but the reality is that it just hasn't happened. The last time I played golf was with Lee — last year. Almost to the day.

So I was kind of looking forward to this. And dreading it. What if I can't hit the ball anymore?

I got to the course by 8:30, unloaded my clubs and met the other guys in our foursome. I took a couple of practice swings to limber up — my first swings with a club in nearly a year — and then teed off. Amazingly, I kept the ball in the fairway, maybe 200 yards. Ended up with a bogey, which I'll take every time.

But I was already drenched in sweat.

We got through the round in decent shape. We all drank plenty of water, and I wore my wide-brimmed straw hat to cover my bald head. One of the odd things about this round was that I actually played pretty well despite my sabbatical from the game. This is a phenomenon I've noticed before. If I let a certain length of time go by between rounds — say a couple months or so — I seem to play well when I do go back out on the course again.

We played a kind of match play, so Lee and I — two righties — defeated the two other guys, both lefties — one up. We had them dormie by the 15th hole. I even sank a 20-foot putt for birdie at one point.

"That was fun," I said as we shook hands, hoping I'd never have to do this again. Maybe we can do this again in three months. It'll be October then.
Posted by Bruce Wehrle at 8:30 AM