The relics are here

I thought I would share with you the artifacts I brought back with me on my trip to Gettysburg for the Civil War Institute. The following pictures are the memorabilia of Pvt. Albert A. Clewell, a probable descendant of mine and an 18-year-old enlistee who fought for the 153rd Pennsylvania Volunteers of the 11th Corps during the Civil War. They were given to me by pawn broker Paul Mastronardi, who had come into possession of them two years ago. It was his goal to find a relative of Clewell rather than try to sell them for profit. We met in the parking lot of a Gettysburg restaurant (A Friendly's, appropriately enough), where he gave me these items. 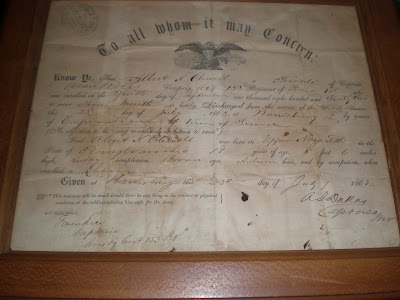 This is Albert's discharge paper. It is probably the only "true" Civil War item in the collection.

The document reads: "To all whom it may Concern: Know Ye, that Albert N. Clewell, a Private of Captain Owen Rice's Company (A) 153d Regiment of Penna Vol who was enrolled on the Fifteenth day of September, one thousand eight hundred and sixty two to serve nine month (sic), is hereby Discharged from the service of the United States, this 23d day of July, 1863, at Harrisburg, Pa, by reason of Expiration of term of Service (No objection to his being re-enlisted is known to exist.)

"Said Albert N. Clewell was born in Upper Nazareth in the State of Pennsylvania, is 18 years of age, 5 feet 6 inches high, ruddy complexion, Brown eyes, Auburn hair, and by occupation, when enrolled, a laborer.

It is signed on the right by an A.S. Dallas, Capt., USA, and on the left by by Owen Rice, the captain of Co. A of the 153rd Pennsylvania.

The curious thing here is that the document uses an "N" for Albert's middle initial. All my research tells me that Albert's middle name was Alexander, so I guess we just leave the clerical error as a by-product of government work. Close enough, I guess. 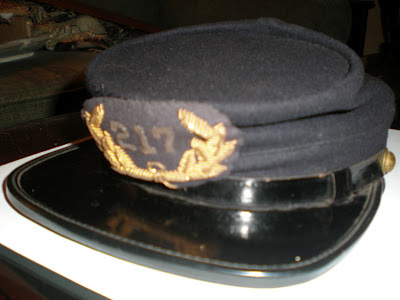 This is Albert's Grand Army of the Republic (GAR) kepi. It is postwar and I'm guessing that if he wore it at all, it was probably in parades or other GAR functions. The GAR is likely the forerunner to today's American Legion and I suspect the boys sat around the table enjoying liquid refreshments and telling war stories.

The "217" badge on the kepi indicates the GAR post of which Albert was a member. It is the Lafayette Post 217 in Easton, PA. I did a little research into this particular post and found out that it caught fire and burned sometime around 1912, taking with it a ton of documents and records. This is probably why it has been so difficult to find any detailed information on Albert. 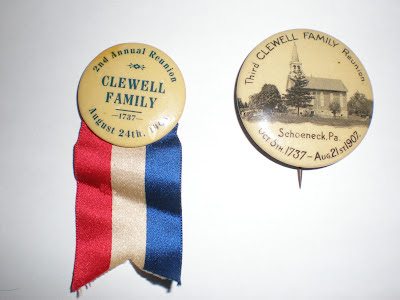 These are Clewell Family reunion pins. The smaller one with the ribbon was held in 1904, while the larger one was held in 1907. Clearly, the Clewells did not meet every year.

But this also makes me wonder if Albert met up with my great uncles, William and Sylvester, at these reunions. I'm guessing they did. All three were born in Nazareth and all three served in the 153rd Pennsylvania. 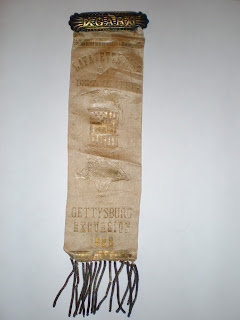 This is Albert's GAR ribbon from Lafayette Post 217. On the bottom of the ribbon it reads "Gettysburg Excursion 1888" which means the post — and Albert — no doubt took a trip to Gettysburg for the 25th anniversary of the battle. Albert would have been 43 years old at the time.


I wonder what he remembered. The 11th Corps was routed on the first day of the battle, but pretty much held its ground the next evening at the base of East Cemetery Hill, fighting off Tar Heels. 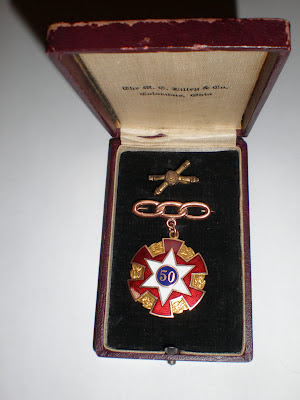 We originally thought this was a GAR pin celebrating Albert's 50 years of service in the organization. But it turns out to be an International Order of Odd Fellows pin.

In truth, this pin commemorates Albert's 50 years of service to the Odd Fellows, a charitable organization. It's nice to know that a man who saw the face of war spent the better part of his 87 years on the planet striving to make life better for others.

Thank you, Albert, for your service.