Remember this picture below? 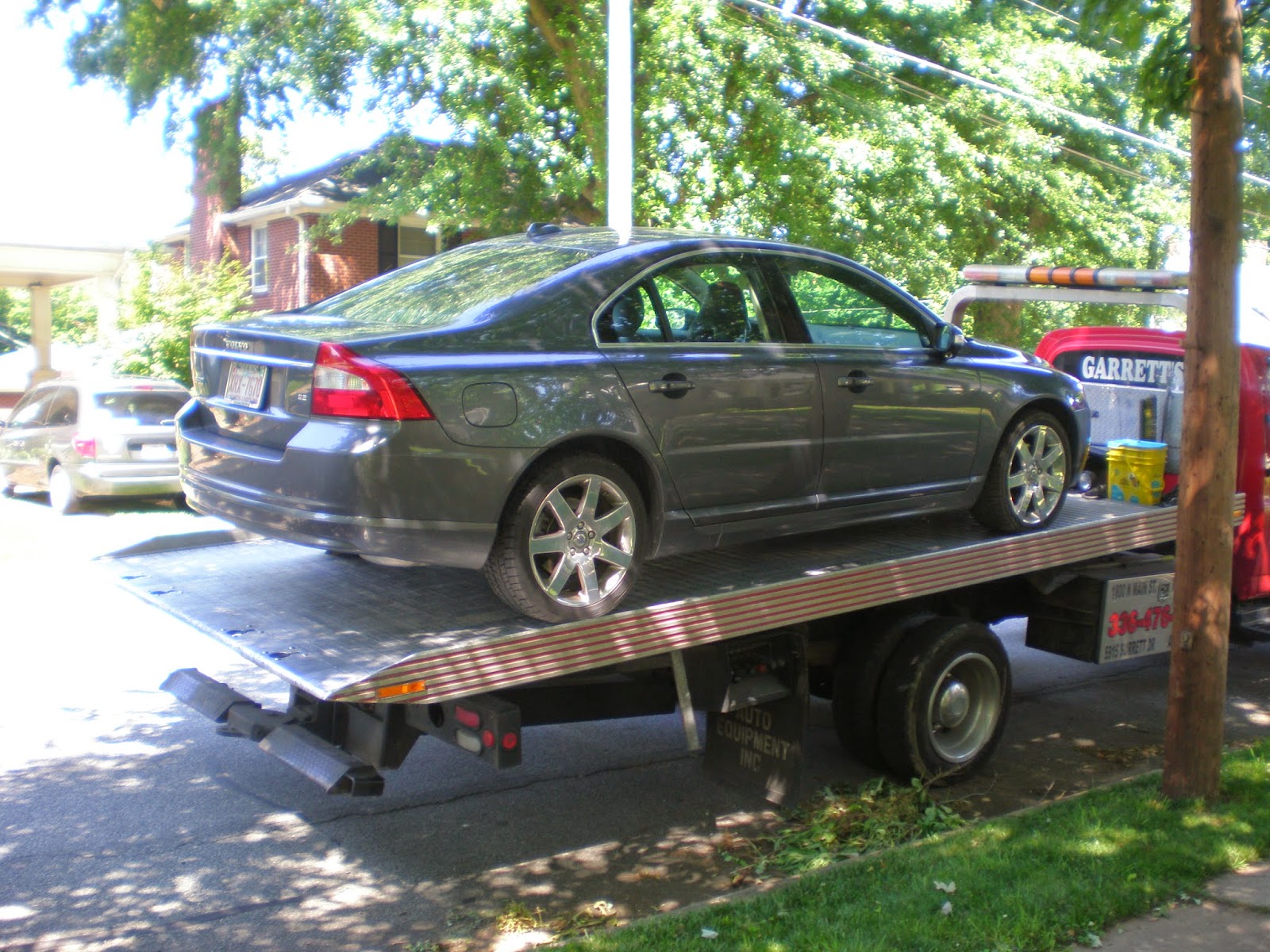 I posted it with my blog about a year ago when my car was making a distressing metallic noise from one of its wheels.

I was afraid to drive the car to the dealership in Winston-Salem because I thought I might do further damage to the vehicle. So we called a towing service and had it carried to the garage.

The repair lasted all of 15 minutes as a paving stone from my then-gravel driveway got caught in the brake calipers was removed. I was told, however, that if I had not had the car carried, there could have been considerable damage done to the wheel. So we made a good call there.

Still, it was a sad sight to see. I hate being without my car for any length of time. Being carless creates a serious void in my auto psyche. Getting my car back from the garage is kind of like a rebirth in spirit and it opens possibilities: I got my wheels back, man.

Well, here's a picture below from about two weeks ago. Deja vu all over again: 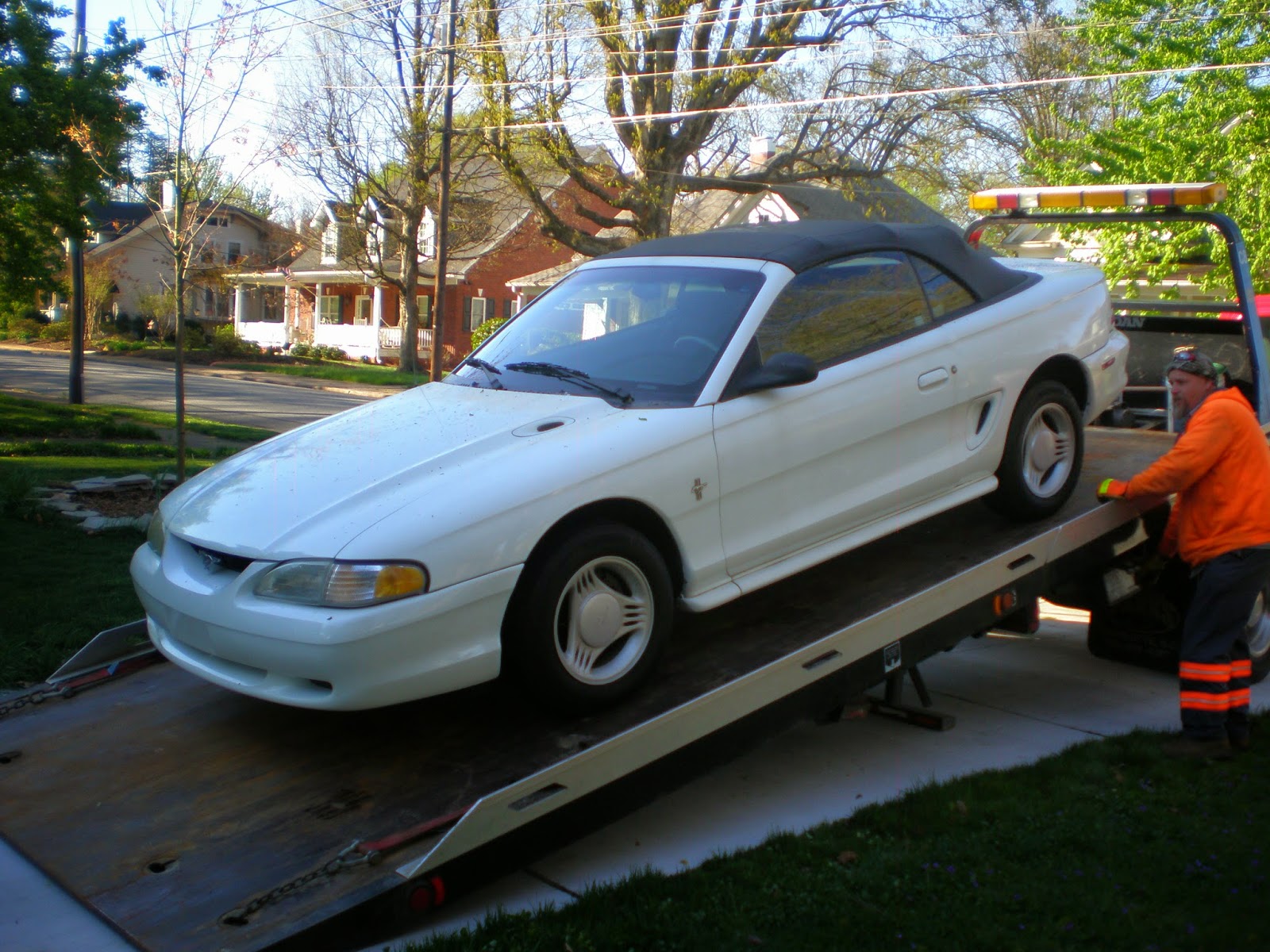 This is my wife's 1994 Mustang. It's been a pretty good car to her for two decades, and, in fact, we'd just taken it to North Myrtle Beach for a three-day weekend. We drove more than 500 miles, including a brief run up to Southport to do a little antiquing and to grab a bite to eat at the Provision Company, one of our favorite waterfront dives.

We got home Sunday. Kim went to work on Monday. On Tuesday evening, when I got home from work, Kim greeted me with "I've got a problem."

Oh, good. I was hoping she would say something like that because I was running low on my quota of problems. "What's the matter? I asked, my heart sinking.

"My car won't start," she said. "It won't do anything. Here, you try," she said, handing me the keys. "Maybe it'll start for you." This is the mystical Kim speaking. If it doesn't work for her, maybe it'll magically work for somebody else. I do see the logic in it.

Anyway, I got in. I put the key in the ignition and turned it. Nothing.  Not even dead battery clicks. My mind raced. What could it be? The battery wasn't that old, and we'd just put a new alternator in the car in the past year. Since the extent of my auto engineering skills is pretty much related to adjusting the driver's seat, I clearly wasn't the answer.

So, on Wednesday morning, we had the car carried to the Ford dealership.

While that was happening, the thought occurred to me that this mini-disaster could have happened while we were at the beach. I counted back the number of ignition turns (or clicks, as Kim and I call them, as opposed to cranks) we had left before the car died: Kim started the car six times on Monday, and four times on Tuesday. Ten clicks. Oh, my. We were that close to being stranded in Southport. Or Calabash. Or somewhere, which would have exponentially (no doubt) added to our quota of problems.

After we got the car to the garage, we later learned that it needed a new battery harness. I never heard of that before. A battery harness? Apparently, it's the connection between the battery and the fuse box, or something like that. I don't know. Because the car is 20 years old, there's not that many places in the country where you can get a harness for that model.

But it all worked out. Several days later, the car was repaired and Kim was back on the road, her spirits revitalized.

She got her wheels back, man.