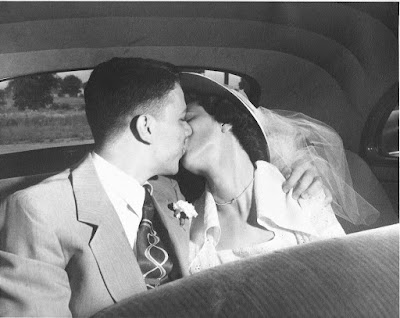 I'm going to take a stab in the dark here and suggest that the above photo, snapped in July 1950, was never intended to be caught on the World Wide Web.

It's a picture of my parents, Charles and Carol, on their wedding day.

They don't look old enough to get married, yet Mom had just turned 22 and Dad had just turned 21. I love this photo — I think they were in the back seat of their 1946 Plymouth — precisely because it's such an intimate moment. I guess it could have been posed, but they look pretty involved with this eyes-shut kiss. I kinda want to shuffle my feet, mumble "Whoa," and look away for a moment.

I am mesmerized. That picture is my future. It is also my past.

And it tells me that this young couple is about to create a family built on a promise of love. I like that. Sixty-five years later, it still gives me a feeling of contentment. And a model to follow in my own married life, even to this moment.

With Mother's Day upon us, this picture gives me pause to reflect. As the youngest of five children herself, Mom was already the recipient of some serious and time-tested child rearing. A legacy of Kessler family values were already instilled in her and were ready to be passed on.

I'm here to say that I think she did that admirably. I learned the difference between right and wrong (I've managed to stay out of jail to this point). I acquired a measure of patience (she served time, after all, as a minister's wife). She gave me a sense of humor that could, at times, be subtle (she did, after all, live with Dad). She loved to read. She loved her pets. She loved music and could sing with a beautifully harmonizing alto voice (I sing with a one-note scale, but I can listen to music with the best of them). She had a talent for painting pictures. She was a great cook. She enjoyed and appreciated her friends.

Interestingly enough, Dad, the minister, had written down something for his wife years ago. It was on one of the blank opening pages of a Ryrie Study Bible, which I assume was a gift to her. All he had written was "Proverbs, 31:10. I have. Thank you. Love, Charlie."

The passage was meant for his wife, about his wife. But the sentiment is also something a child might express for its mother.

"An excellent wife (woman), who can find? For her worth is far above jewels." 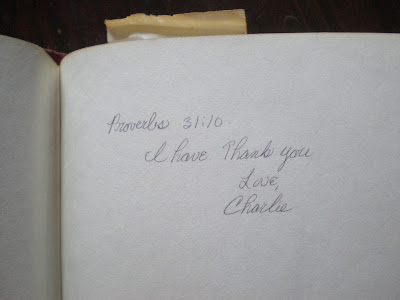