As much as I enjoy listening to Underhill Rose on my CD player — I've got three of their discs running on a continuous loop in my car — there's nothing better than listening to them sing their mesmerizing harmonies in a live performance.

And, preferably, to hear them in a place like High Rock Outfitters. Spending two hours or so listening to them perform is like taking a break from the noise, from the crush, from the smog that sometimes clouds around us.

It's like taking a breath of fresh air. Mountain air.

So last night, at HRO, I got the best of all possible worlds. 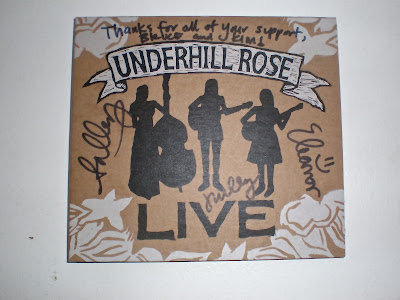 There they were, three seriously talented women from Asheville (guitarist Molly Rose Reed, banjoist Eleanor Underhill and upright bassist Salley Williamson) once again singing their songs in one of their favorite venues, promoting their latest CD, "Underhill Rose Live."

I've been waiting patiently for this moment. While their three previous CDs are accomplished products, they are also studio productions that give us a sound you don't quite get on the stage.

The stage, of course, is less cluttered. The sound from mouth to ear, from instrument to ear, offers us a better sense of the truth, I believe, when not enhanced by studio gadgetry. We are there. It's electric. It's acoustic.

That's what I like about live recordings. It helps put me back in my front row seat, where I want to be. Interestingly enough, several of the tunes in this album were recorded at HRO last September. I was there. Perhaps you can hear me applauding.

You can find most of the songs in this 15-tune collection in their previously released CDs, but one of the joys, for me anyway, are the songs not found on any of their other albums. Their covers of "Bette Davis Eyes," "Trouble in Mind," "In Color," "These Boots are Made for Walkin'," and "Long Monday" are, in my opinion, some of the best tracks on the CD.

Just listen: Molly deliciously delivers a particularly soulful rendition of "Bette Davis Eyes;" Salley is full of fun — wait, did she just wink at us? — in "These Boots are Made for Walkin'," and Eleanor's wistful serenade in "Long Monday" artfully turns John Prine's plaintive lyrics into a moving picture show.

They might have included another one. Last night, on stage, they offered us "Ode to Billie Joe," and it was absolutely stunning, what with Molly's moody, understated vocals recalling the story line. New life to an old favorite. Very nice.

You'll find Underhill Rose's ear-pleasing harmonies and crisp musicianship everywhere on this album, tune after tune, clearly defining what their stage show is all about. Simply slip the CD into the player and you've paid the price of admission.

Underhill Rose is about to embark on its third British Isles tour in June, so it may be autumn, or later, before we see them again. That's why I'm going to my car right now and adding this latest release to my unending loop.

(See "Ode to Billie Joe" video at 7:45, but enjoy four Underhill Rose tunes at HRO here: Thanks to Franklin Bell for this.)