We'd never been invited to a "soft opening" before.

We were excited. Going to a "soft opening" fulfilled a bucket list item we didn't even know we had. Plus, it made us feel kinda special. 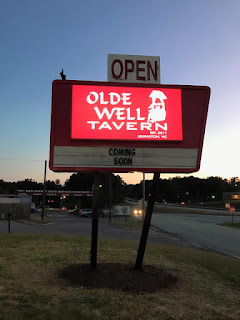 So there we were Saturday evening, 7 p.m. sharp, along with about 50 or 60 other invitees to check out Olde Well Tavern and see what they had to offer.

Awww, man. The Grand Opening isn't even until Tuesday, and I'm already a regular. It's that good.

Here's what's happening: When Big Rock Tavern (located on National Boulevard just off Business 85, and which used to be Avery's in a previous life, and Heritage House before that, and probably a Howard Johnson's before that) unexpectedly closed down several months ago, Kim and I thought that was that. It was unfortunate, because we'd just discovered the place (even though it had been open for nearly a decade) and the hand-pattied burgers were some of the best I'd ever had. You could thank kitchen manager James "Koozie" Thomason for that. (See here).

But then Mandy Barker and her husband, JT, came along, bought the place, and put their hearts and souls into refurbishing the business.

They made seemingly minor changes to the building, which still retains a sports pub atmosphere with a dozen TVs dotting the walls. There's a new kitchen floor, a new ceiling, about 10 taps at the bar for craft beers on draught, and several standup coolers, also filled with craft brews.

It's all good. But to me, the best thing the new owners did was track down Koozie and convince him to run their kitchen. He agreed. Koozie is back, doing what he does best. And that's a good thing.

So, back to the soft opening.

Soft openings, by design, are usually invitation only events. It gives the ownership an opportunity to see how its staff performs prior to the grand opening, and it's usually a stressful event. Soft openings are generally filled with friends and family, so complaints are at a minimum.

From what I could tell, the wait staff (although harried, since all the guests basically ordered at once) is experienced and friendly. And despite 50 or 60 orders rolling into the kitchen at the same time, the food arrived in good order. I had the half-pound cheeseburger with lettuce and tomato on a Kaiser roll, with onion rings. Kim had the grilled chicken salad and an order of fried mushrooms for both of us.

I opted for a beer I hadn't had since my days in Pennsylvania more than 40 years ago: a draught of Narraganset lager. That brought back some pleasant memories...

It was great. We were back home about 90 minutes later, satisfied and content.

You can't ask for much more than that.
Posted by Bruce Wehrle at 8:32 AM