The other day I went into our guest bedroom to search for a book I keep in the shelving there.

It was then my eye caught the bottom shelf of the bookcase: at least 100 record albums were sitting there, upright, out of sight, out of mind, forgotten, and yet, at the same time, a valuable vinyl diary of my youth.

I forgot about the book I was looking for; I started flipping through some memorable album covers. The Beatles were there, of course, from start to finish, as well as most of their solo work (to this day, I am a Beatles-phile. Not only do I have their complete catalogue on vinyl, but on cassettes and CDs as well. I am prepared).

It was my collection of records after the Beatles that tickled me, some of which I'd forgotten. Some I wished I'd never remembered. My taste in music virtually jumped the scales. 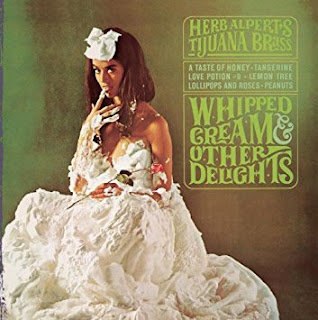 There was the good stuff, of course. There was the fabulous farewell by The Band, "The Last Waltz." I listened to that one over and over back in the day. Then there was some Dave Mason, Simon and Garfunkel (four albums), James Taylor (2), Bruce Springsteen (3), Jackson Browne, Don McLean, Eagles (3), Crosby, Stills, Nash and Young (2), Fleetwood Mac (4), Doobie Brothers (3), Carole King (2) and Carly Simon (2). (Carly's "No Secrets" album cover held no secrets. As did Herb Alpert's (5) "Whipped Cream and Other Delights" cover before that, which seemed somehow a coming of age for me. Hey, I was only 14 at the time.)

I kept flipping through the albums. For some reason, I bought Richard Harris' "A Tramp Shining," possibly for "MacArthur Park." Don't ask. I also found three Harpers Bizarre albums because I like tight harmony, but having said that, I don't own a single Beach Boys on vinyl. Go figure. God Only Knows.

Back in my college days in Pennsylvania, I detoured into progressive rock and jazz and I faithfully listened to a radio station out of Philadelphia, WMMR. Consequently, I have "The Use of Ashes" album by Pearls Before Swine, featuring a song called "Rocket Man," which has no connection at all to Elton John's (2) "Rocket Man."

I also dug Yes (4) and listened to Yessongs ad nasuem. Yours is No Disgrace, after all.

I also have two Weather Report albums ("Black Market" and "Heavy Weather", of which I had long forgotten. I also got into Chuck Mangione for a while, but he was never Herb Alpert. He never had a compelling album cover.

There were some familiar names whose albums I bought, but to this day, I don't know why. I have The Kinks "Muswell Hillbillies," but I don't recognize a single song title. I have John Klemmer's "Waterfalls," but here I shrug my shoulders. There's the Moody Blues, but I'm not sure "To Our Children's Children's Children" was a real biggie. Watching and Waiting, I guess.

Then there's Starland Vocal Band. Two words: "Afternoon Delight." But no Stones. Hey, I'm a Beatles guy. (I do have the Stones on CDs, so calm down).

There are some one-time purchases I do appreciate, like Melanie, Janis Ian, Pure Prairie League (for "Aime"), Boston and Genesis.

But what are Dr. Hook, Captain & Tenille and the disco Bee Gees doing there? Oh, yeah. After I got married, some of Kim's records merged into my collection. That's also where some of the beach music filters in. Beach music was a good addition.

Some artists I didn't realize I liked so much: I have four Cat Stevens albums, which must have come from my metaphysical period. There are three Billy Joels, three Steely Dans, three Rod Stewarts and two Associations.

The Sixties and early Seventies was not my country period. Again, I had to get married before I learned to appreciate Johnny Cash, Patty Loveless, Willie Nelson, Patsy Cline, et al. None of them appear on any records I own.

Looking back, it's great to have all these vinyl albums. It's like a scrapbook of my life, bringing back all these memories in the way that only music can do.

If only I had a turntable that still worked.