The day after the New England Patriots and the Los Angeles Rams each won their conference championships (heck, it might even have been by Sunday night), this revealing NFL meme popped up on Facebook: 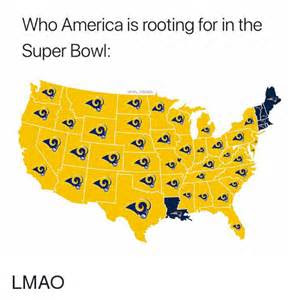 My first instinct was to laugh.

My next instinct was to shake my head in serious agreement.

I can understand why America might be a little tired of the Patriots. Next Sunday, the Pats – with greatest-of-all-time quarterback Tom Brady – will be making their ninth appearance in the Super Bowl in this century.

In case you've forgotten, this century is only 18-plus years old.

Brady, who is 41 years old and seems to have lost absolutely nothing from his talent bag in almost two decades, will now have more appearances in the Super Bowl than any NFL team (other than the Patriots, of course).

If the Patriots beat the Rams next Sunday, it will be New England's sixth Super Bowl victory in an awesome span that began in 2001 with a 20-17 victory over the – really? – Rams, who were in St. Louis then. That also means Brady has stayed in one city longer than the Rams have in that time frame. Sheesh.

If the Patriots win and Brady should happen to win the Most Valuable Player award, it will be his fifth MVP trophy. He'll have more hardware in his trophy case than ACE (is the place).

If they haven't already, the Patriots appear to have reached that sainted realm held almost exclusively by the nearly perennial champions New York Yankees, where you either love 'em or you hate 'em, and there's no middle ground. It's that kind of prestige.

In an informal survey that I conduct each morning during my workouts at the YMCA, I've been asking my friends if they're going to watch the Super Bowl this year.

"I dunno," is the most common reply. That in itself is a little revealing, since Super Bowl Sunday has turned into an excuse for National Party Day over the years. Everybody watches the Super Bowl.

But maybe that's changing. I myself plan to have the remote handy. If the Patriots are dominating, I'll probably do some channel surfing. I kinda like to know what's going on with the mystery of Oak Island, you know? But if the Rams – with whom I have no interest at all – are winning, I might stick around to see how things play out.

Right now, I haven't even paid much attention to the hype, which surely will ramp up this week. Ho-hum. Even Kim has threatened not to make her chili this year.

Maybe I can watch a replay of last year's Super Bowl. I'm a dyed-in-the-green Philadelphia Eagles fan, and I'll be living off the Eagles 41-33 victory over New England for the rest of my life. I still watch Nick Foles call for the Philly Special every chance I get.

Maybe the Rams have something special in their playbook, too. We'll see. Maybe.