I had my socks blown off last night.

Kim and I did something we've never done before in our nearly 39 years of married life together.

(Got your interest now, huh?)

We went to see a high school musical. In fact, we went to see the Lexington Senior High School production of Oklahoma!

We went primarily because Emma West, the daughter of our friends, Billy and Stacy West, had a leading role in the show. She played Laurey Williams. 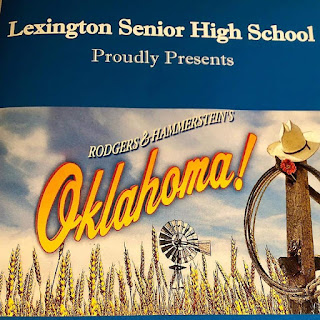 We only know Emma peripherally because, as a teenager, she runs in vastly different circles than we do. She's worried about where she's going to college while we worry about whether or not we're getting a tax refund this year; she's worried about maintaining her lofty GPA while we're worried about how we're going to pay for getting our house painted. Stuff like that.

So when we do see Emma, it's usually in a social setting, like at a neighborhood party sitting around a fire pit, eating S'mores. "Hi, Emma, how's school going?" we'll ask. She'll answer, we smile, and our social spheres slowly drift apart from there.

I don't think we expected this. Emma, from the very first note she sang (she sings? She sings like that?) was powerful, confident, and assured. Stage presence and nuance were everywhere, from her spoken lines to her ballet steps. She brought tears to our eyes because the depth of her talent was a joy to behold. Suddenly, our little circle went from "We know this girl" to "We KNOW this girl." She was an eye-opening surprise, and we took pride in her performance in that way you can take pride in somebody else's kid.

It was a wow moment.

Now, before I get too carried away, let me point out that virtually the entire ensemble – nearly 40 students – was magnificent. They might change my mind about seeing future high school productions. Kinsey Calderone, a freshman, was spectacular as Ado Annie. Dymond Robinson, a junior, was perfect as Aunt Eller. Geizi Romero Hernandez, another junior, was awesome as Curly, the male lead, and Devon Burns, a senior, nailed it as Will Parker. Franco Stumbo, a sophomore, was great as the peddler Ali Hakeem.

The production (which was physical at times, featuring one-handed cartwheels, elevated trust falls and high-flying somersaults) was fantastic, from the actors to the seven-piece orchestra. Stacy Sosebee-West, Emma's mother, made the costumes herself. There must have been 100 of them. I'm shaking my head in wonder.

But there are a couple other things to note here. As you may have noticed by many of the surnames, there was great diversity in this cast. At least 15 nationalities took part in this play about an American territory on the verge of American statehood. Let that tell you something. These kids are the future of Davidson County, hear them roar.

The quality of the production also brought some focus on the Lexington school system itself. Traditionally, it's the athletic teams that tend to be a reflection of a school's heartbeat. But the arts can be a part of that, too. We generally don't see that because high school stage productions don't usually take place twice a week for three months of the year.

But the arts are our common voice to help express our vast diversity and points of view. LSHS is a melting pot that perhaps makes the community a little stronger, a little deeper, a little more tolerant. Stir constantly. Add spice. Taste occasionally.

I'll get off my own stage now. I need to find some socks.