Goose and the Monkey

Three, six, nine
The goose drank wine
The monkey chewed tobacco on the street car line
The line broke
The monkey got choked
And they all went to heaven in a little row boat

It never ceases to amaze me when small-town entrepreneurs bring their vision to the community. I can't imagine the gigantic risks they must be taking – financial, emotional, sweat equity and otherwise – to bring their plans to fruition.

Yet Brent Moore and his wife, Ashlee, seem to be standing on the cusp of something quite remarkable for Lexington. On Saturday night, after a couple years of ups and downs, of near misses and an historic fire in 2018, the Moores gave us a soft opening of their new business: Goose and the Monkey Brewhouse, located on 401 S. Railroad Street in the Depot District.

In the world I come from, soft openings are generally limited affairs, usually by invitation only to the guests and a chance to iron out any potential grand opening kinks (on Feb. 29) by the employees.

Last night, by contrast, was amazing. When Kim and I showed up shortly after the appointed hour, the place was packed shoulder to shoulder with invitees and their friends. I'm guessing several hundred people were milling around, exploring, tasting the craft beers that will be brewed and served there and simply enjoying themselves.

It was the hardest soft opening I've ever seen, and I mean that in a good way. Everything, it seemed, went smoothly. Wowser.

One of the conversations I heard last night, and repeated several times over, was how special this moment was. It wasn't that long ago when folks had to drive across the Yadkin River – and the county line – to purchase a six-pack. Now, Lexington has its own brew house, located almost catty-corner to the Bull City Ciderworks. And both places are within easy walking distance of the Breeden Amphitheater. Who could have thought that something like this was ever possible just a decade or so ago?

The building itself is a former warehouse for the Lexington Home Brands furniture plant that borders the right-of-way for the Norfolk Southern Railroad. The Moores, in their vision of re-purposing the place, put up a south-facing wall of windowed garage doors facing the tracks, which is a huge plus for all of us train geeks who like to see Diesel engines rolling by. It's a nice touch.

The Moores, actually, did a lot of the physical work themselves during the renovation and restoration of the building: grading, patching, moving stuff from here to there. 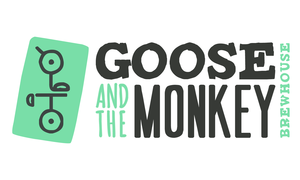 Another nice touch are the sliding metal fire doors, now displayed on a wall inside, that helped save the building from the historically massive fire that consumed much of the defunct and vacant Lexington Home Brands plant. The warehouse was on the periphery of the fire as the blaze engorged upon itself, and the fire marshall closed the fire doors to try and protect the property while hosing down the building with uncounted thousands of gallons of water. It's little doubt why we have a Goose and Monkey today.

If the soft opening is any indication, there's clearly plenty of interest for a brew house in the gradually developing Depot District. So cheers to that.

But I am still a little curious about the name Goose and the Monkey. Ashlee has explained several times over that it comes from a hand-clapping nursery rhyme that she sang as a child. It's kind of obscure. I never heard of it prior to this, and it took me more than a little time to find the verse on Google and with which I led this story.

But maybe that's the point. Goose and the monkey. It's unusual. It's distinct. It kinda makes you want to see what it's all about.

Now if somebody can only explain the logo to me...