I think we're about ready to wrap up the mini-tour through historic Lexington City Cemetery.

But I do have one more stop to make and then add an observation or two.

The last marker I want to acknowledge belongs to Cicero F. Lowe and, like the others I've mentioned  in my previous posts, I came across his quite by accident. Several years ago, I just happened to look in the direction of his obelisk, and there he was. 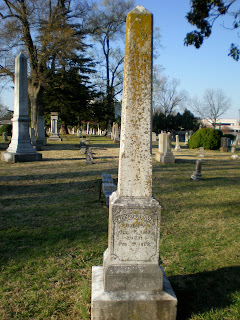 So just who is Cicero F. Lowe anyway? I can't tell you much, but what I do know is that he was the cashier for the Bank of Lexington. I know this because I have both a $5 and a $10 Bank of Lexington note, and the name "C. F. Lowe" is signed in the lower left corner on both of them.

The Bank of Lexington didn't last long. It was chartered in 1859 with $300,000 in assets, and it somehow managed to survive the inflationary Civil War only to shut its doors in 1866, a year after the war ended.

I'm going to guess that Albert M. Hunter (see here) had nothing to do with this demise. And I can only wonder what became of Cicero after the bank closed. Did he work for another bank? Was he a part of Reconstruction? His marker is rather elaborate, so he was apparently a man of means — or came from a monied family. What? What? What?

What I always thought was interesting about Lowe's signature is that, for many years, the chairman and president of the former Lexington State Bank was Bob Lowe. I held hope against hope that all this was more than just a coincidence and that there was some kind of family connection going on here.

But I talked with Bob about it one day, and he said as far as he knew, there were no direct ties between the two of them. Nor could LSB trace its corporate lineage to the Bank of Lexington. 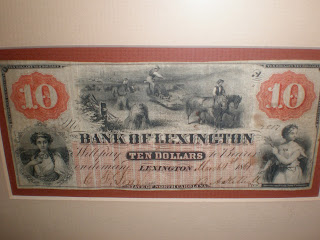 There is one other note of interest here, so to speak.

My $10 certificate is dated "March 1, 1861," which puts it in a very historic time line. Less than six weeks later, Confederate forces fired on Fort Sumter in Charleston harbor, igniting the Civil War.

And, interestingly enough, both notes were engraved and printed by the American Bank Note Company, located in New York City.

For more information about the Bank of Lexington notes, check here.

So I bring my tour to an end. I think I read somewhere — maybe it was on the Find a Grave site — that there are more than 6,000 markers in the cemetery, and more are being added nearly every day. Many of the stones there are works of art. Some are plain and simple. But everyone of them has a story to tell.

The place is alive with history.

I hope you enjoyed the tour. I sure did.
Posted by Bruce Wehrle at 8:27 AM