About a year ago I was taking my morning walk through Lexington City Cemetery when something caught my eye at the foot of a gravestone about 30 yards away from me.

So I went over to the stone and saw what had caught my attention was a five-pointed bronze star that I instantly recognized as a Grand Army of the Republic (GAR) marker, meaning that the recipient was a veteran of the Union Army during the Civil War.

"Hmm," I thought. "How unusual is this to find a GAR marker in a municipal southern cemetery?" GAR markers sprinkle Yankee cemeteries from Maine to Minnesota. I'm not so sure that's true of southern cemeteries. What, I wondered, had Charles E. Burgess done to get himself buried in Lexington, NC? 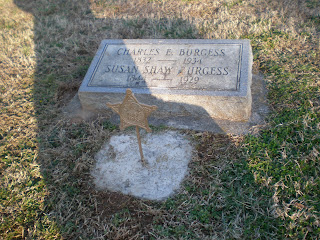 And were there more GAR markers in the cemetery?

Yes, indeed. The next day, altering my route somewhat, I came across the stone of Albert M. Hunter, punctuated with a GAR marker. Wow. I couldn't believe it. Two Yankees buried in a cemetery with dozens of Confederates. What the heck is going on here?

A little research was in order.

The Burgess stone didn't have much information on it, and a Google search of his name didn't turn up anything pertinent.

So for the time being, at least, Charles E. Burgess has come to a dead end. Literally.

Ahhh, but Albert M. Hunter. His stone stands several feet tall, and even though the inscription on it is weather-beaten and almost illegible, his place of birth jumped out at me and nearly wrestled me to the ground — Adams County, Pennsylvania. I know where that is. It's county seat is Gettysburg.

Oh my gosh. A Union veteran, born in Gettysburg, is buried in a southern cemetery. The irony... 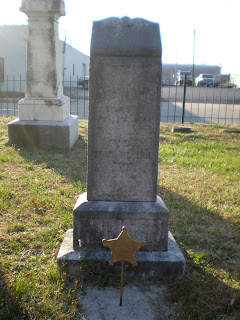 And a Google search of his name was a true bonanza. I should be so lucky in the lottery. Turns out, Hunter enlisted with a cavalry unit — Cole's Cavalry — as a bugler in 1861. But within months, he was commissioned as a lieutenant and later achieved the rank of captain of Company C.

He was captured during Robert E. Lee's first foray into Yankeeland just days before the Battle of Antietam (or Sharpsburg, for all you non-Yankees). He was paroled and later saw action in the Gettysburg campaign, but not in the monumental three-day battle itself. A few days later, during Lee's retreat from Gettysburg, Hunter and his men burned Lee's pontoon bridge at Falling Waters — after Lee had already departed.

Interestingly enough, he was discharged in 1864, but later re-enlisted as a private in February 1865, just months before the end of the war. I can only speculate that he saw the war was winding down and wanted to be part of its history. Maybe he wanted to march in the Grand Review.

Hunter survived the war and sometime along the way he and his wife, Annie, migrated to Lexington, NC. I have no idea what brought him here. Maybe he got a job as a sports writer for the local newspaper, I don't know. His records do show that he was a banker in Gettysburg before the war. I can't imagine there was such a critical need for a Yankee banker in post-war Lexington, but something brought him here, and he liked it enough to stay. And the townsfolk apparently liked him well enough to keep him here. I hope he understood their accents.

In any event, he lived to be 78 years old. Maybe a little more research — a look through old city directories, perhaps, or a visit to the historical museum, may shed more light on Albert M. Hunter and Charles E. Burgess. If I come up with anything, I'll revisit this post.
Posted by Bruce Wehrle at 9:12 AM