Walking through history — Part I 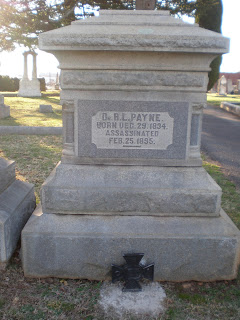 Each morning, God's weather and my mood permitting, I take a four-mile walk along the trail at Grimes School. I've done this for years. Sometimes I extend this exercise an extra half-hour or so by heading off to the nearby Lexington City Cemetery, part of which is built on a considerable incline and so it really gets my heart to pumping.

Perhaps strange to say, I like cemeteries. I consider them to be very much like history books for all the tales they tell — or tales not told but imagined, depending on how well you can divine the weather-beaten words etched on the tombstones. In any case, they really do talk to me.

Once, while in Brunswick, Maine, my wife and I found the resting place of Joshua Lawrence Chamberlain, a Union hero at the Battle of Gettysburg. Another time, we found the elaborate grave of Confederate general James Longstreet in massive Alta Vista Cemetery in Gainesville, Ga.

Anyway, Lexington's cemetery is as conversational as any I've strolled through, and with a minimum of research, you can find some very interesting stories buried there. I'd like to relate a few that I've uncovered, so bear with me, dear reader, because it may take me several posts over the course of several days to accomplish this.

And we'll start with what I consider to be a very intriguing story:

One of the most prominent markers in the cemetery belongs to Dr. R.L. Payne. It stands about six feet high, accented at its base by a UDC Southern Cross of Honor, indicating that the good doctor was a Confederate veteran.

But the one thing that catches your eye on his stone, above all else, is the word "Assassinated."

Holy smokes. What's that all about? Who assassinates doctors?

Turns out Baxter Shemwell did.

This occurred in 1895. Shemwell was a rather well-connected guy back in the day, operating several businesses, including a livery stable, a farm implement store and a pharmacy, among his other enterprises.

He also liked to carry firearms. That, and his apparently short-fused temper, did not promise for lasting relationships. Shemwell became embroiled in a feud with Dr. Payne over an insurance policy, according to a book by former Thomasville Times editor Wint Capel titled The Good Doctor's Downfall (which, interestingly enough, is not about Dr. Payne, but rather Thomasville physician J.W. Peacock, who gunned down Chair City police chief John Taylor in 1921. What the heck...?)

Anyway, Shemwell encountered Dr. Payne on Lexington's Main Street one day (I've been told this was during a break in a court appearance for both), and Shemwell pulled out his pistols and started firing away, killing the doctor, who ended up with a pretty nice and thought-provoking marker in the cemetery.

Shemwell, meanwhile, pleaded self-defense in the ensuing trial and got off. Connections? Maybe.

But apparently he was a nasty guy. He later served time for attempting to shoot down attorneys Wade Phillips and John Bower for refusing to accept a retainer from him. Shemwell served part of a subsequent 30-month sentence working on a chain gang on Highway 47 out toward Central Davidson, which now bears the name of Shemwell Highway.

He once held a gun to a train conductor's belly when he was told the train did not make a scheduled stop in Lexington. It did that day.

Shemwell finally died in, yes, a gunfight on Main Street in 1932. He was 74 at the time, and he intended to shoot down storekeeper Adam Sink, who held several mortgages on property that Shemwell had title to. In the gunplay that followed, Shemwell was brought down by Lexington police chief R.B. Talbert. Shemwell survived long enough to be taken to the hospital, where he died of his wounds.

It's said that Shemwell's final resting place is a secret, but an Internet search revealed an obituary that said, in part, that Shemwell "will be taken to Tyro and laid to rest in the cemetery where the parents of the deceased and other near relatives are buried." It's uncertain whether or not that cemetery still exists. It's uncertain whether or not I will look for it.

Talbert later went on to have a boulevard named after him, where you can now enjoy several Mexican restaurants, pizza, movies, or a workout in a gym.