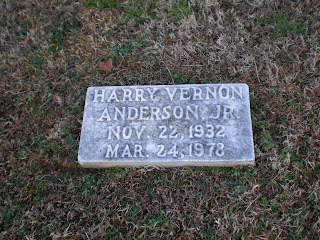 In continuing my stroll through the Lexington City Cemetery, it occurs to me that some deaths are simply tragic, and sometimes they can alter the course of a city's history.

That may have been the case with Harry Anderson.

No, not that Harry Anderson, the actor/comedian who played Judge Harry Stone on the television comedy Night Court. The Harry Anderson I'm talking about was the mayor of Lexington for several months before he was killed by a particularly ferocious and selective lightning strike during a camping retreat at Linville Gorge over the Easter weekend in 1978.

Anderson was only 45 years old and after winning an unopposed election for mayor by acclamation, he held the hopes of an entire city in his grasp. From what I can gather — I'd been in Lexington for less than two years as a rookie sports writer for The Dispatch — he was wildly popular, no doubt in part for his youth, vigor, enthusiasm and foresight. He'd already demonstrated some of those attributes during four years as a city councilman.

The city council, in fact, was primed to consider the purchase of a nuclear power plant as well as the establishment of a regional waste treatment system, according to The Dispatch. Indeed, it's clear to see now that Lexington was approaching a crossroads in its history. By the 1980s and certainly into the 1990s, the city would start losing some of its lifeblood furniture industry to overseas interests. Anderson, who was a vice president of marketing for Burlington House Furniture, may have been able to guide Lexington over those bumpy, twisting roads.

But it was not to be.

According to an article in The Dispatch, Anderson was one of 19 campers on the retreat. There had been some light rain that day, and some cloud-to-cloud lightning, but no indication of what was to come. Most of the campers were huddled under a tarpaulin at the center of the campsite, with Anderson standing next to a tree at the center of the site, where a wood stove had been erected.

When the bolt came, Anderson was killed instantly. He was the only one who died, but the strike came perilously close to wiping out a core of Lexington's intelligentsia, including lawyer Bob Grubb (who was hospitalized with burns), councilman Robert Team, and Dr. Sidney Hood. All members of the party, according to the article, were either knocked down or suffered some kind of injury in the incident.

One member of the party had to hike for several miles to get help.

Anderson's resting place is marked by a simple stone with nothing more than his name, date of birth, and date of death. There is no indication of his role with the city, or the promise of his potential.

It's easy to be fatalistic about this. What direction would Lexington have taken had Anderson lived? It's impossible to say.

Sometimes stuff happens for a reason. And sometimes, stuff just happens.
Posted by Bruce Wehrle at 9:39 AM