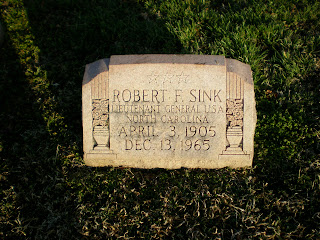 I do love my war heroes.

I think that's because, in the face of unspeakable horror and indignity a spark of humanity somehow seems to emerge — to save a buddy, to save a stranger, to correct an injustice — without regard to the danger to self. I don't know from where that motivation comes. I hope I never do, but if ever I do need that kind of courage, I hope I have it.

I imagine Lexington City Cemetery has its share of war heroes, but one stands out — Gen. Robert Sink. His story was told, at least peripherally, in the wonderfully produced HBO miniseries Band of Brothers, which followed the exploits of Easy Company of the 506th Parachute Infantry Regiment of the 101st Airborne Division in World War II.

Sink, who was portrayed by actor Dale Dye in the miniseries, was a colonel in the war and the commander of the 506th. He was so well respected by the men who served under him that his outfit was often referred to as the Five-Oh-Sink. Oh my.

The National Guard Armory in Lexington was named for him.

His World War II accolades and citations were remarkable and lengthy, and included, among other things, the Silver Star with two oak leaf clusters; the Legion of Merit; and the Air Medal. He was considered a master parachutist (only four percent of military parachutists achieved that status during his time) who made two combat jumps during the war — one on D-Day, and one during the ill-fated Operation Market-Garden. He also was in Bastogne commanding his troops during the Battle of the Bulge.

He annually celebrated his birthday by jumping out of perfectly good airplanes.

Sink died when he was only 60 years old and was buried in the Lexington Cemetery at the site where his marker rests today. But about a decade ago his remains were re-interred at Arlington National Cemetery. I think that is more than appropriate.

Here is a Web site worth looking into for further details and some interesting pictures about Sink:

http://www.506infantry.org/hisrhqwwiiphoto01.html
Posted by Bruce Wehrle at 10:14 AM